Mangla Gauri The Mangla Gauri shrine is marked by two rounded stones that symbolize the breasts of the mythological Sati, the first wife of Lord Shiva. It is a very old and sacred temple which is located in the Chand Chaura area of Gaya town. Hundreds of devotees visit this temple every day, which is situated on top of a hillock.

Pind Dan starts from Falgu River According to Ramayana, when Lord Rama came to Gaya along with Sita for pitripaksha (or to perform Pindadanam), Sita cursed the Falgu River following some disobedience on the part of the river. The mythology states that on account of this curse, Falgu River lost its water, and the river is simply a vast stretch of sand dunes However, water can always be found all the year by digging in the dry sandy riverbed. That’s why it is called “Antah Saliya”. 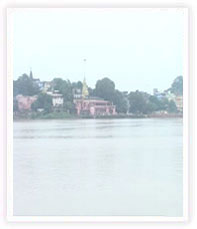 Akshay Bata is the last important place where pinda dan is done. Pinda Dan is starts from Falgu River and its Close at Akshay Bat. Akshay Bat is got a boom by Sita, That you can’t die. It’s a not destroyable , that’s why it is called Akshay Bata. According to ved puran: Lord Krishna will stay under its shadow, when whole world will drown in to the water, but this tree will not die. Because of getting the boom by Sita. Those who Pind daan here,there ancestor goes to dev lok from pitra lok.

About 8-kms northwest of Gaya, the 873-ft high Pretshila hill is situated. The meaning of the name is the hill of ghosts and it is sacred to Yama, the Hindu god of hell, and forms one of the sacred places of pilgrimage. On the top of the hill there is a small temple dedicated to Yama (The God of death). At the foot of the hill are three tanks named Sati, Nigra and Sukha, and there is a fourth tank called Ramkund on the summit near the temple of Yama, in which it is said that Ram himself bathed. Whoever bathes in this tank is said to have rubbed out his sins, and whoever recites the proper mantras or spells with the usual offerings of Shraddha and Pindas is freed from pain.

This hill is the highest (793-ft) in Gaya and lies in south of the town. There is a small natural fissure in the rocks at the top of the hill, through which a person can just manage to crawl. It is believed that by crawling through it the pilgrims escape rebirth. On the top of the hill is a small temple containing a statue, said to be representation of Brahma, though it properly belongs to Shiva, as the figure has five and not four heads, as in regular statues of Brahma.

Bodhgaya is situated at bank of Niranjan river, It is distance from 11 Kms from Gaya town. the place where Gautam Buddha attained enlightenment. Bodh Gaya is a religious site and place of pilgrimage associated with the Mahabodhi Temple Complex in Gaya district in the Indian state of Bihar. It is famous for being the place where Gautama Buddha is said to have obtained Enlightenment (Bodhimandala). The place-name, Bodh Gaya, did not come into use until the 18th century CE. Historically, it was known as Uruvela, Sambodhi, Vajrasana or Mahabodhi. The main monastery of Bodh Gaya used to be called the Bodhimanda-vihāra (Pali). Now it is called the Mahabodhi Temple. For Buddhists, Bodh Gaya is the most important of the main four pilgrimage sites related to the life of Gautama Buddha, the other three being Kushinagar, Lumbini, and Sarnath. In 2002, Mahabodhi Temple, located in Bodh Gaya, became a UNESCO World Heritage Site.According to Buddhist traditions, circa 500 BC Prince Gautama Siddhartha, wandering as an ascetic, reached the sylvan banks of the Phalgu, near the city of Gaya. There he sat in meditation under a bodhi tree (Ficus religiosa). After three days and three nights of meditation, Siddhartha claimed to have attained enlightenment and insight, and the answers that he had sought. He then spent seven weeks at seven different spots in the vicinity meditating and considering his experience. After seven weeks, he travelled to Sarnath, where he began teaching Buddhism.